The "Dry Fog" Dust Control System works on the principle of agglomeration. The Dust particles released from a Material Handling/Processing Plant which become air borne, are made to pass through a blanket of extremely fine Fog. The dust particles and the Micronic size Fog droplets collide and adhere to each other, thus increasing their mass. After a series of such collisions, the mass becomes heavy enough to cause settlement of the agglomerates on the larger mass of material being handled. The "Dry Fog" System is capable of controlling all types of breathable and fugitive dust ranging from 1 to 800 microns.

Basic research has shown that if water droplets of approximately the same size as the dust particles are produced, the probability of collision between the two is extremely high. We have developed a specially designed dual Fluid nozzle which shears water into droplets of the desired size by resonance effect. The fine droplets evaporate before wetting anything but the air-borne dust. The water addition in the system is 0.1%(Max.) by weight of the material being handled.

All conveyors transfer station duly covered by Skirt/Hood on the conveyor for handling of material including wagon tippler and various transfer point duly covered from wind blowing pressure. 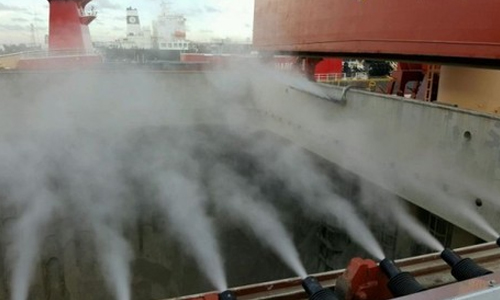